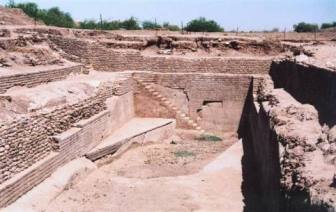 Dholavira is an archaeological site at Khadirbet in Bhachau Taluka of Kutch District, in the state of Gujarat in western India, which has taken its name from a modern village 1 km (0.62 mi) south of it. This village is 165 km from Radhanpur. Also known locally as Kotada timba, the site contains ruins of an ancient Indus Valley Civilization/Harappan city. It is one of the five largest Harappan sites and most prominent archaeological sites in India belonging to the Indus Valley Civilization. It is also considered as having been the grandest of cities of its time. It is located on Khadir bet island in the Kutch Desert Wildlife Sanctuary in the Great Rann of Kutch. The area of the full site is more than 100 ha (250 acres). The site was occupied from c.2650 BCE, declining slowly after about 2100 BCE. It was briefly abandoned then reoccupied until c.1450 BCE.

The site was discovered in 1967-8 by J. P. Joshi ex. D.G. of A.S.I. and is the fifth largest of eight major Harappan sites. It has been under excavation since 1990 by the Archaeological Survey of India, which opines that “Dholavira has indeed added new dimensions to personality of Indus Valley Civilisation.” The other major Harappan sites discovered so far are: Harappa, Mohenjo-daro, Ganeriwala, Rakhigarhi, Kalibangan, Rupnagar and Lothal.

Do you know, Historical Facts