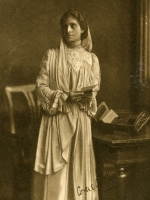 Cornelia Sorabji (15 November 1866 – 6 July 1954) was the first female advocate from India when admitted to the Allahabad High Court in Uttar Pradesh. She was the first female graduate from Bombay University, and in 1889 became the first woman to read law at Oxford University,and also the first Indian national to study at any British university. Later she became the first woman to practise law in India and Britain. In 2012, her bust was unveiled at Lincoln’s Inn, London.

Born in Nashik,she was one of nine children of Reverend Sorabji Karsedji, a Parsi, and his wife, Francina Ford, a Parsi who had been adopted and raised by a British couple. Ford, who believed that education must begin at home with women, helped to establish several girls’ schools in Poona (now Pune).Due in part to her influential social position, Ford was often consulted by local women in matters pertaining to inheritance and property rights. Many of Sorabji’s later educational and career decisions would be heavily influenced by her mother. As a child Sorabji received her education both at home, with her missionary father, and at mission schools. After becoming the first female graduate of Bombay University, Sorabji wrote in 1888 to the National Indian Association from India for assistance in completing her education. This was championed by Mary Hobhouse and Adelaide Manning contributed funds together with Florence Nightingale, Sir William Wedderburn and others. Sorabji arrived in England in 1889 and she stayed with Manning and Hobhouse.In 1892, she was given special permission by Congregational Decree, due in large part to the petitions of her English friends, to take the Bachelor of Civil Laws exam at Somerville College, Oxford, becoming the first woman to ever do so.