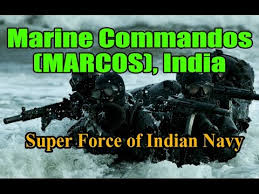 MARCOS, previously named as Marine Commando Force (MCF), is the special forces unit of the Indian Navy. created for conducting special operations such as Amphibious warfare, Counter-terrorism, Direct action, Special reconnaissance, Unconventional warfare, Hostage rescue, Personnel recovery, Combat search and rescue, Asymmetric warfare, Foreign internal defence, Counterproliferation, Amphibious reconnaissance including Hydrographic reconnaissance. The MCF is specially organised, trained and equipped for the conduct of special operations in a maritime environment. MARCOS is short for Marine Commandos. The force has gradually acquired experience and a reputation for professionalism over the two decades it has been in existence. The MARCOS are capable of undertaking operations in all types of terrain, but are specialised in maritime operations in Jammu and Kashmir through the Jhelum River and Wular Lake, a 65 square kilometre freshwater lake. Some MARCOS personnel are also attached with the Army special forces units conducting counter-terrorism operations in the area. MARCOS are widely feared among the terrorists, who call them “Dadiwala fauj”,meaning the “Bearded army” because of their bearded disguise in civil areas.

The exclusivity of the unit lies in its competence to operate in all three mediums namely Sea, Air and Land. The MCF is specially organised, trained and equipped for the conduct of special operations in a maritime environment. Personnel from unit are deployed round the clock from Kashmir for CI/CT ops to GoA, Somalia for anti-piracy operations. The unit has always been at forefront in providing diving / civil assistance during times of natural disaster. The core tasking of MARCOS include:-

The MCF currently operates out of the naval bases at Mumbai, Visakhapatnam, Goa, Kochi and Port Blair.There are plans to shift the current training facility at the Naval Special Warfare Training and Tactical Centre to a new facility to be set up at the erstwhile Naval Academy in Goa.