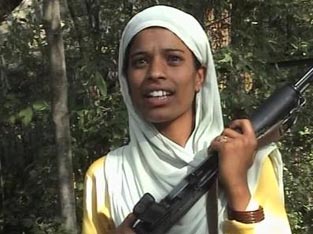 Rukhsana Kausar (born 1989) is a Pahari Gujjar woman from Upper Kalsi known for the 2009 shooting of a LeT militant at her home, in Rajouri district of Jammu and Kashmir (J&K).She was born to Noor Hussain and Rashida Begum. A Class 10 dropout, she has been awarded the India National Bravery Award, for the killing of a Laskar-E-Taiba militant leader at her residence, using an axe and AK47 rifle. She has a younger brother, Aijaz, who helped her chase other militants and contact the police afterward.

By 2013, Rukhsana had taken a position as constable in her home town. She had two daughters. She still sought security from the government for her family. She had been awarded National Bravery Award, Sarvottam Jeevan Raksha Padak, Sardar Patel Award, Rani Jhansi Bravery Award and Astha Award .